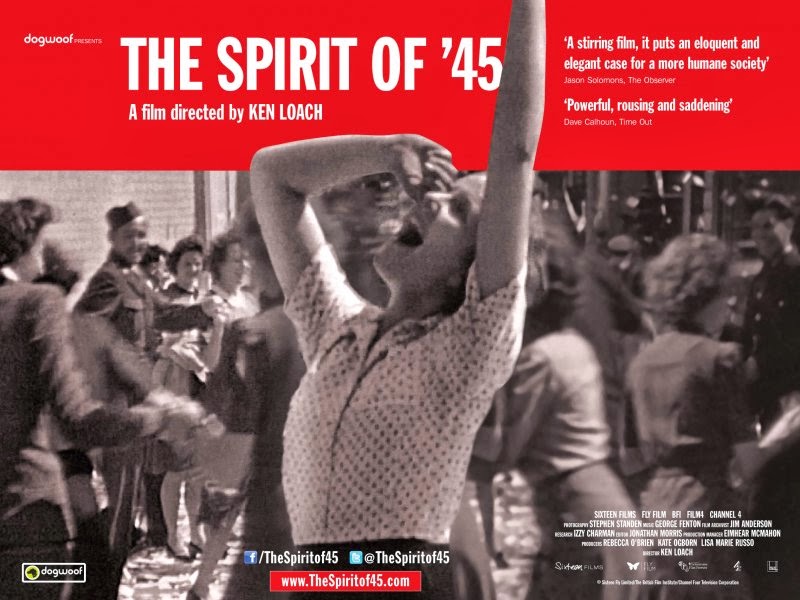 Is permaculture a politics? Is it political? Should it be? Is permaculture becoming more political, perhaps in response to social and environmental concerns not being addressed at all effectively by the established political parties? These questions, and the exploration which followed, were sparked off by a meeting in Exeter on 8th January of a group of people interested in the new party named ‘Left Unity’ (LU).

LU came about after showings of a film by Ken Loach called ‘The Spirit of ’45’, which showed how people got together to rebuild Britain after the Second World War. A Labour government was elected, and did all the right things to help in the effort: social house-building programmes, the NHS, other social welfare benefits, nationalised industries, cooperating with an active Trades Union movement. The film then shows how all of that is being destroyed, initially by the policies and propaganda of the Thatcher government, and how Labour in power has failed the people. 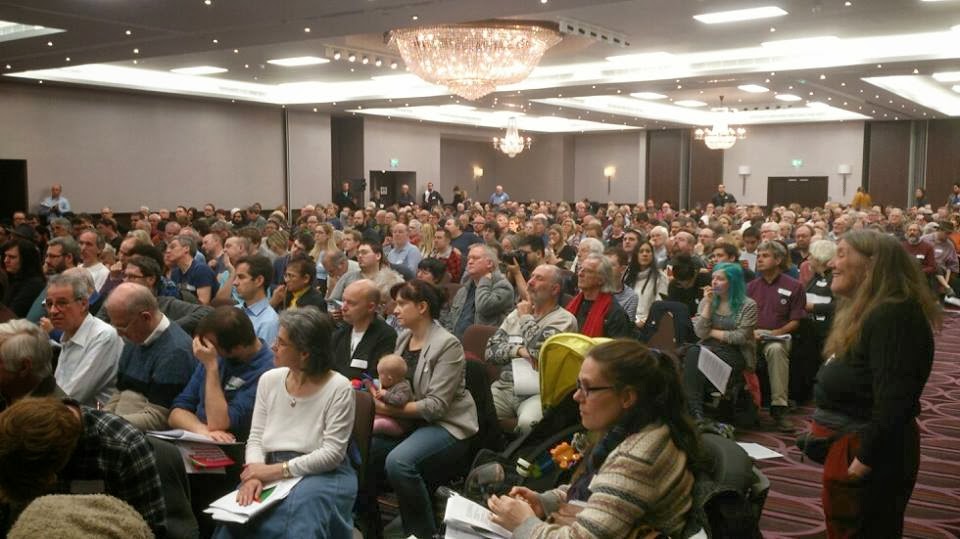 Loach called for a new Party of the Left to be formed to tackle community breakdown, and the suffering caused to working class people by high levels of unemployment, degrading and low paid jobs, extreme inequality, disturbing levels of poverty and debt, homelessness, the privatisation of the NHS, and ‘cuts’ and austerity measures. The founding conference of Left Unity took place on 30th November.

Ten people came to our local LU meeting to form a core group to get things organised.1 Not all had met before, and in the introductory go-round three people mentioned being interested in permaculture. One of the three (‘H’) had only come along with her partner. From the way she announced her interest in permaculture one gathered that for her this was the opposite of involvement in party politics. She said she was ‘non-voting’ and ‘disillusioned with all that’, and was now focussed on ‘how you live your life’. But she has a political background, her father having been active in the Green Party, and her mother spent time at the Greenham Common peace camp. Her partner is a committed leftie, having been a member of the Communist Party of Wales, and declared himself now to be ‘anarcho-socialist’. They had moved to Exeter very recently, and he in particular wanted to know what was going on in the city.

The second person (‘T’) to mention permaculture is a student of agriculture at Bicton College. He is working on a permaculture project and said that the ‘design basis is brilliant’. He is interested in Left Unity for the implied openness. He is ‘broadly left, as long as it is uniting’.

I was the third person at the LU meeting with an interest in permaculture. Curiously, between us we seem to cover the three ethical principles: H is for ‘people care’, with her focus on ‘how you live your life’; T is for ‘earth care’, with his interest in agriculture; my focus is on permaculture politics, which is surely what ‘fair shares’ implies. The world today is so far from fair that it beggars belief. Oxfam recently published a paper which showed that ‘the world’s richest 85 people have the same amount of wealth as the 3.5 billion people who comprise the poorer half of the world’s population’ (The Guardian, 20 January 2014).

Permaculture has to get political if it has a role to play in taking on that unfairness with the urgency it merits, which is impossible unless we develop ways of meeting everyone’s needs while also restoring ecosystem health. But if permaculture becomes a politics, let it be soundly based. We need to develop our own critique of political economy. We should explore the hidden history of permaculture, understanding that permanent agriculture and permanent culture have existed for millennia – as has the series of parasitical civilisations which have seized the surplus produce from those who labour to produce all the wealth. 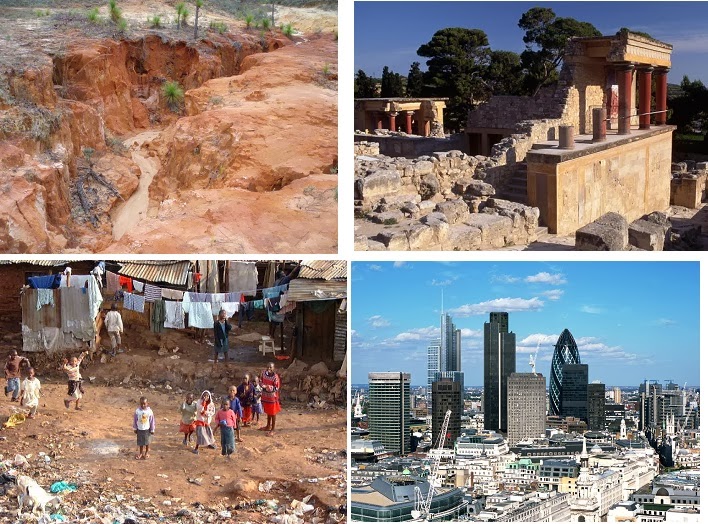 There is an old saying: ‘civilised man has marched across the face of the earth and left a desert in his footprints’. Each civilisation in history thrived for a few centuries before the natural resources it depended upon, especially soils, were exhausted from supplying the needs and wants of its alienated citizens behind their defensive walls. And so the civilisation died, leaving behind the crumbing bones of its ramparts and monuments. Western civilisation is simply the latest and worst example, and it too will come to an end. From that understanding the role of permaculture resolves itself into how we help the world get back to normality, despite being handicapped by the damage resulting from a few centuries of fossil-fuelled capitalism.

To get the idea of permaculture as a world changing politics, a good place to start is Bill Mollison’s 1989 film ‘In Grave Danger of Falling Food’.2 Mollison has been criticised for being over-optimistic, and harming the credibility of permaculture. That view may have been right twenty years ago. When the film was shown on BBC TV, the tiny office of the British Permaculture Association could not cope with the avalanche of expressions of interest. Things are very different now. Not only have permaculture design techniques been developed and demonstrated in the UK and worldwide, but the Association is very well run and raring to go.

The intellectually-minded amongst those interested in world change have been engaged in a ten year debate on future scenarios for the collapse of the capitalist system.3 The mistake they make is in assuming that the dominant economic system is the only one in existence. About twenty years ago, economist Susan George came up with a rule of thumb: in the developed world, 80% of the population are ‘inside’ the capitalist system, 20% ‘outside’; in the less-developed world it is the other way round.4 George’s rule of thumb simplifies a very fuzzy situation, and may not be correct numerically today, but the idea is still useful. Capitalism engages with a minority, and is unaffected by the masses of the powerless, landless and jobless. It is interesting to note that permaculture methods have been dramatically successful applied to the problems of marginalised groups struggling to survive on degraded land.

The old guys, the big names in the history of political thought, understood what makes capitalism tick better than we do today, because they witnessed its development over the past few centuries.5 I recommend that permaculturists read up on that history, engage in politics,6 understand that capitalism will break down, and that working at the margins is what we need to do. We must have ‘faith in humankind’, as did Rabindranath Tagore (1861-1941), whose important part in the hidden history of permaculture has been the subject of my researches over the past decade.7 [1112 words]

1 Around fifty people had attended an earlier ‘public’ meeting in Exeter in June 2013, with a guest speaker from the LU central organising committee. Since then, a similar number had joined the Exeter and East Devon LU mailing list.
2 ‘In Grave Danger of Falling Food’ is available on Youtube, http://www.youtube.com/watch?v=CjWaP0iQmWw [28/1/14]
3 Holmgren, ‘Crash on Demand: Welcome to the Brown Tech Future’, http://www.resilience.org/stories/2014-01-20/crash-on-demand-welcome-to-the-brown-tech-future [30/1/14]
4 At any time, those ‘inside’ include members of the capitalist and working classes; ‘outside’ means (largely) self-sufficient or engaged in the ‘informal’ economy (part of which is the illegal ‘black’ economy). In the Marxist model, the informal economy serves as a ‘reserve army of labour’, which is drawn into and out of the labour force according to capitalism’s regular economic cycles, and also performs voluntary functions such as child raising and care of the old and sick. (I think George mentioned this rule-of-thumb in one of her talks, and regrettably I cannot find a written reference.)
5 I take issue with Holmgren’s reference to ‘arcane but defunct economic theories’ in ‘Crash on Demand’.
6 See Steve Jones, ‘Permaculture and Politics’ with video ‘Occupy Permaculture’, http://www.permanentculturenow.com/permaculture-and-politics/# [17/1/14]
7 ‘Permaculture and Tagore’s Faith in Humankind’ will be the subject of my next article in this series. As a taster which is relevant to this discussion, see Tagore’s poem ‘They Work’ (1941), http://tagoreanworld.co.uk/?page_id=98 .
Posted by Permaculture Association at 7:04 pm