Permaculture is growing. Education and research are expanding. Interesting demo sites are becoming available to visitors. Permaculture ‘dots on the map’ are multiplying.1 All this is good news. What was a lifestyle choice for a few, based on a set of ethics, principles and techniques, is starting to look like a movement. Some people may be drawn to permaculture as a political movement.2 Others would prefer an anti-political understanding of permaculture,3 which still offers the prospect of widespread world change. The Bengali poet and polymath, Rabindranath Tagore (1861-1941) offers such a model. 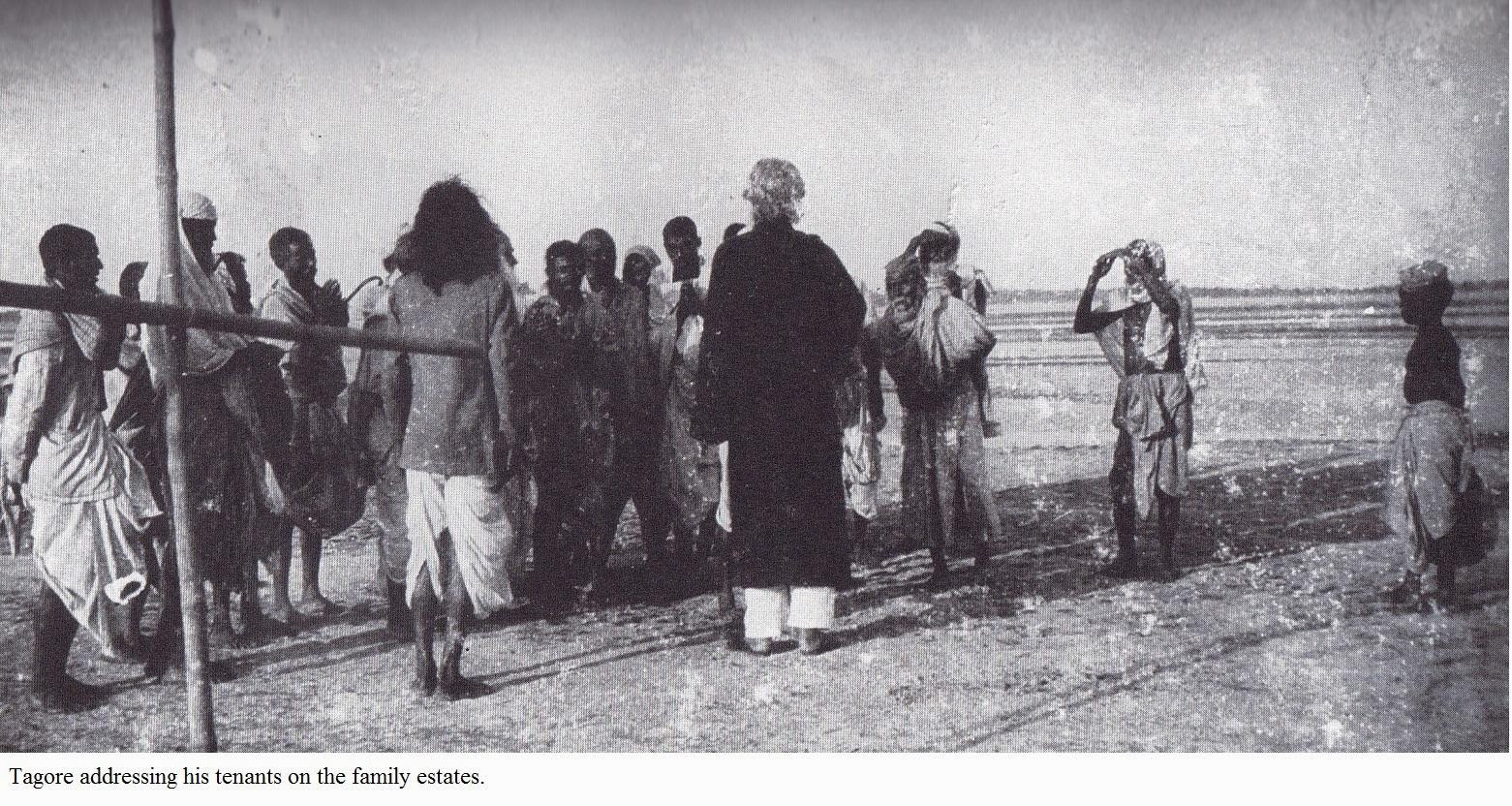 Tagore often insisted he was not a philosopher or a scholar. He was not interested in theories or utopian visions. His authority comes from his practical efforts over fifty years to revive traditional Indian society, which had been severely disrupted by British rule. His remedy for a broken society was to heal it from within. Cooperation was the key. People must get together in their local communities to help each other and themselves. To give them a start, they would need advice and expertise, suitable training and education, health and welfare provision, affordable finance, and encouragement towards developing participative government and local conflict resolution. Most importantly for Tagore, to counter fatalism and apathy their spirits must be raised, by reviving traditional arts and crafts, music and story-telling, fairs and festivities. Tagore’s motivation changed over the course of his rural reconstruction efforts: initially he felt sympathy and a sense of responsibility as a landlord, next he tried to set out a national programme of constructive self government, lastly he pinned his hopes on bringing about change through education.

Tagore was both an indefatigable man of action and a compulsive writer who left a vast written legacy.4 Fortunately for us, his ideas on world change can be appreciated by studying just five pieces of writing: two poems: ‘Call Me Back to Work’ (1894) and ‘They Work’ (1941) and three essays: ‘Society and State’ (1904); ‘Nationalism in the West’ (1917) and ‘City and Village’ (1928) (all available at www.tagoreanworld.co.uk).The dates of the two poems span the period over which Tagore was working to revive Indian village society. ‘Call Me Back to Work’ shows vividly the Poet’s compassion and commitment. In the final stanza he urges himself into action: 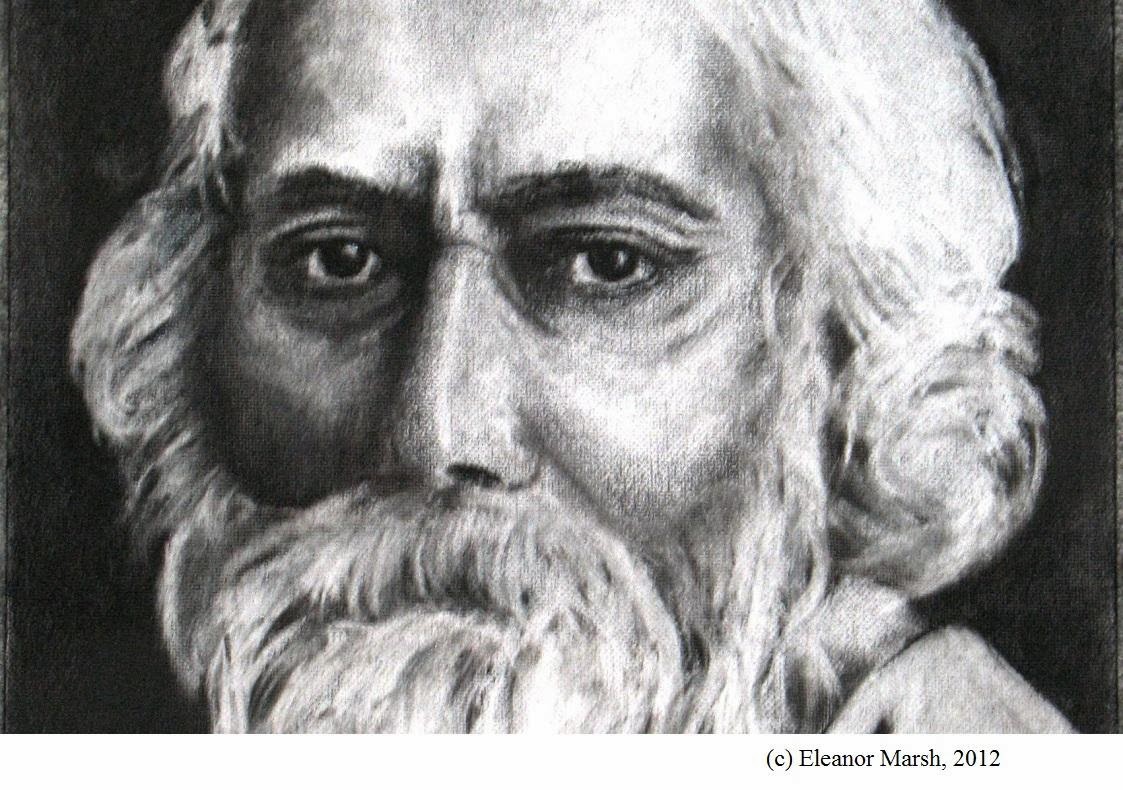 Gather yourself, O Poet and arise.
If you have courage bring it as your gift.
There is so much sorrow and pain,
a world of suffering lies ahead,—
poor, empty, small, confined and dark.
We need food and life, light and air,
strength and health and spirit bright with joy
and wide bold hearts.
Into the misery of this world, O Poet,
bring once more from heaven the light of faith.

It was a revelation for Tagore when he was put in charge of the family estates in East Bengal (now Bangladesh) in 1891. He was deeply moved by the natural beauty of the region and the simple life of the common people. He saw the deep despair which pervades rural life all over the country and determined to improve the conditions with programmes of rural development. The root cause of this despair was British imperialism. The British introduced private land ownership and created an urban middle of professionals and administrators. The absentee urban landowners exploited and neglected their tenants.

Tagore moved his base to Santiniketan in West Bengal in 1901, and continued rural reconstruction work in the neighbouring villages, as well as maintaining his interest and involvement in the Tagore estates. In 1903 the British government in India announced their intention to partition Bengal, into a largely Muslim East and a largely Hindu West. Popular objection to this ‘divide and rule’ measure manifested as protest marches and a ‘Swadeshi’ boycott of British good, particularly cloth. Tagore became a leader of the protests, wrote patriotic songs, gave stirring speeches and led a demonstration of Hindu-Muslim solidarity involving tying friendship bracelets. He favoured transforming the Swadeshi boycott into a move towards ‘Constructive Swadeshi’, and he urged urban landlords to return to their estates and engage in reviving village craft industries and local fairs. His essay ‘Society and State’ (Swadeshi Samaj in Bengali) was originally a public address he gave in 1904, at a meeting to discuss the failure of the British government in Bengal to solve a problem of water shortage. In the essay Tagore makes a powerful case for devolving decision making and responsibility to grassroots level, thus reviving traditional Indian society: Tagore explains that their country has traditionally had a society, but not a state in the English sense:

What in English concepts is known as the State was called in our country Sarkar or Government. This Government existed in ancient India in the form of kingly power, but there is a difference between the present English State and our ancient kingly power. England relegates to State care all the welfare services in the country; India did that only to a very limited extent.

Tagore goes on to explain that in India, ‘social duties were specifically assigned to the members of society’, and the king made his contribution, like any other wealthy member of society, and the word for social duties is dharma, which ‘permeated the whole social fabric’.

Tagore was unable to persuade the English-educated urban intelligentsia to adopt his political programme, and the negative boycott turned violent and destructive, and so he turned his back on the protests and returned to his base at Santiniketan, where he implemented the Constructive Swadeshi ideals on a small scale. He had started a small school at Santiniketan in 1901 where the teaching encouraged creativity, engagement with nature, local food growing, and learning about life in the villages. The school grew in numbers and led eventually to Tagore establishing an international university named Visva-Bharati. A key element of the university was its Institute of Rural Reconstruction named Sriniketan. Tagore described the philosophy behind this venture in his essay ‘City and Village’, in which his aims appear very modest. He explains that rather than think of the whole country, it is best to start in a small way: ‘If we could free even one village from the shackles of helplessness and ignorance, an ideal for the whole of India would be established’. 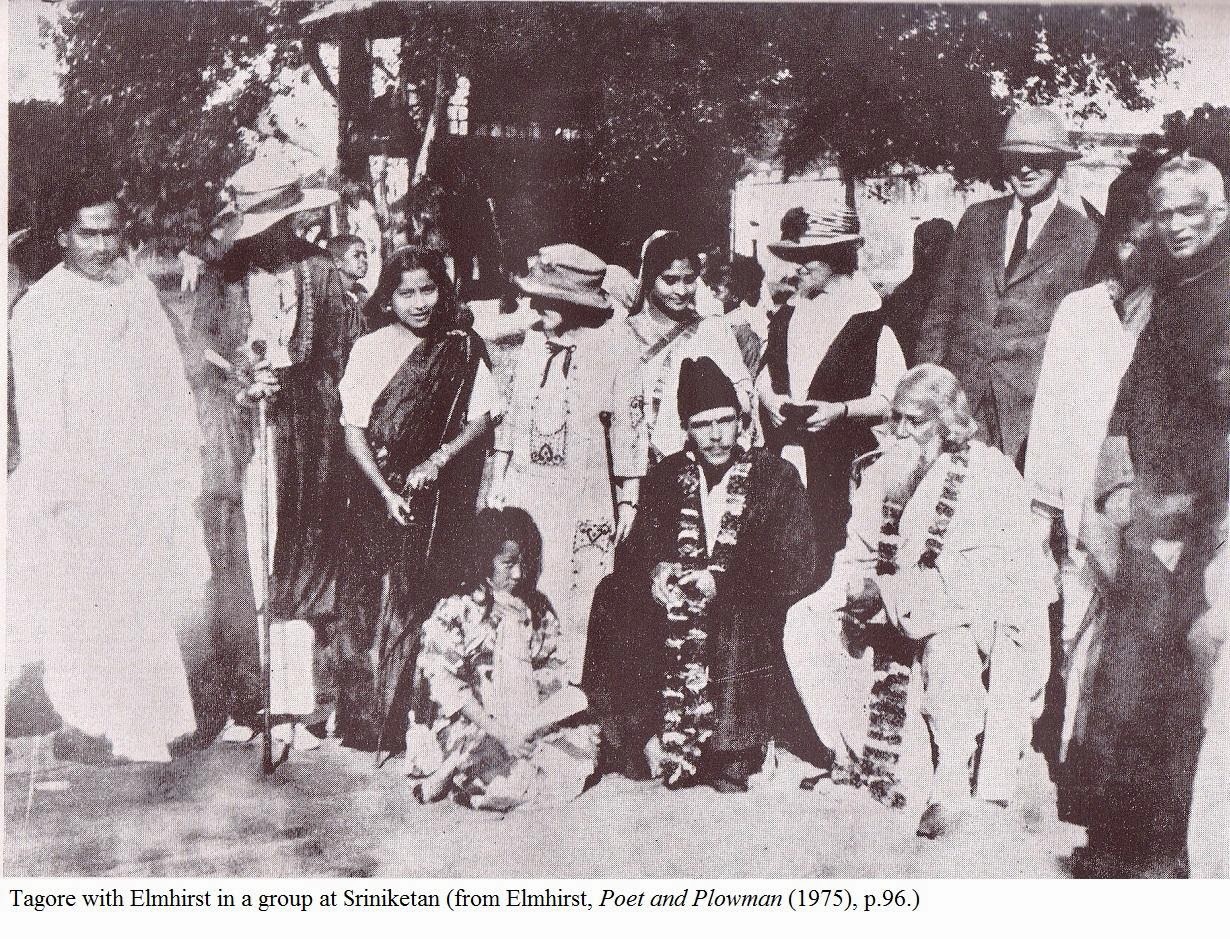 Obviously Tagore failed in his efforts. Vandana Shiva, the indefatigable campaigner for Indian farmers’ rights against agribusiness monopolies, tells of the poverty and despair, with more than 270,000 farmers caught in the debt trap committing suicide since 1995.5 Curiously enough, Tagore’s failure then gives us hope a century later. He foresaw, if not the circumstances Shiva describes, but the dehumanising effect of industrialism and the nation state, and he wrote a penetrating critique in ‘Nationalism in the West’, which is the text of a lecture he gave over twenty times in 1916 in the United States.

The final piece of Tagore’s writing, the poem ‘They Work’, written in 1941 shortly before he died, provides a particularly important and optimistic insight. Its subject is the transience of the empires which had successively ruled India: the Pathans, the Moghuls, then the ‘mighty British’:
Again, under that sky, have come marching columns of the mighty British, along iron-bound roads and in chariots spouting fire, scattering the flames of their force.
I know that the flow of time will sweep away their empire’s enveloping nets, and the armies, bearers of its burden, will leave not a trace in the path of the stars. 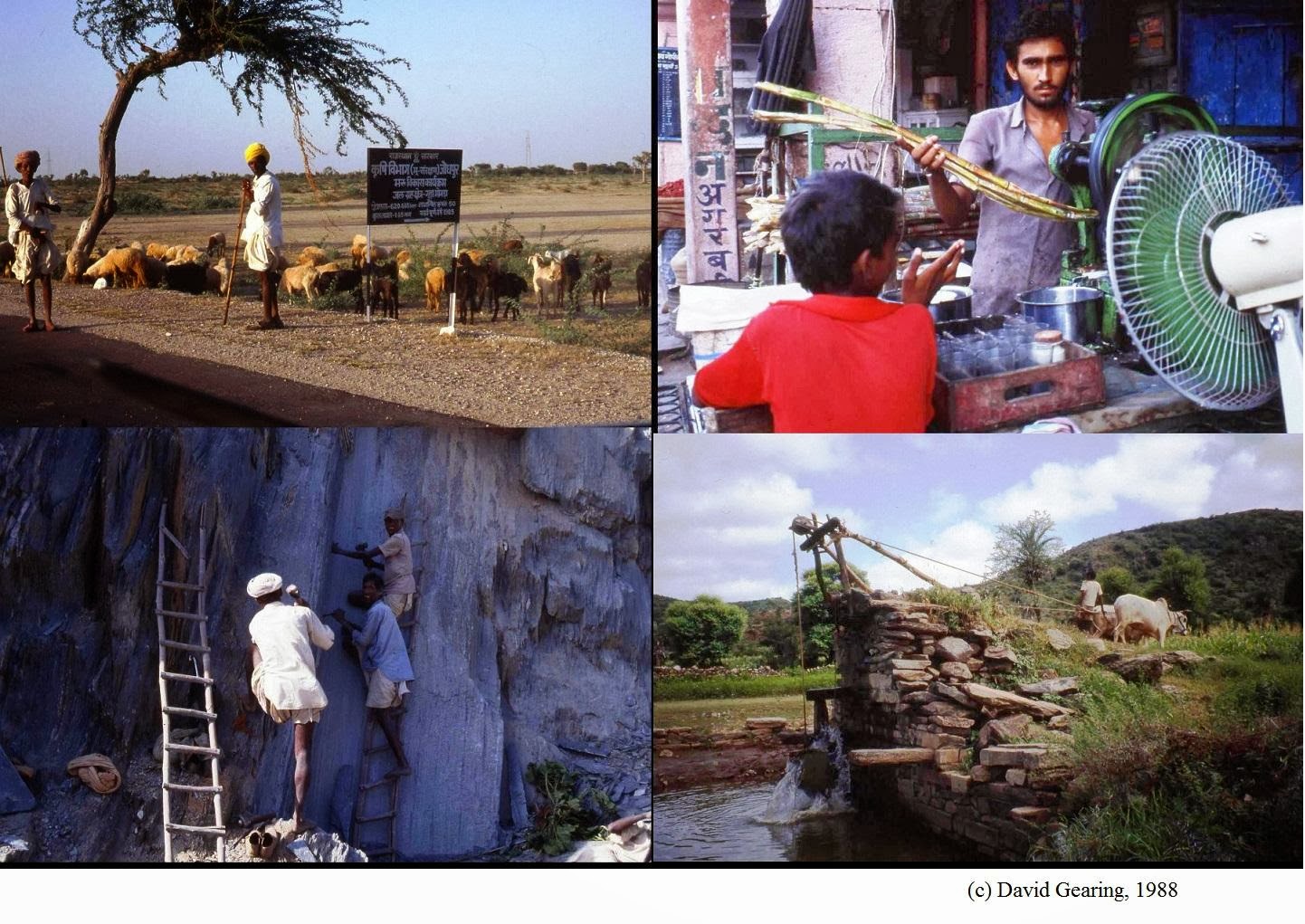 Through all these changes, the people who carry out the work go on: ‘Empires by the hundred collapse and on their ruins the people work.’ Translated into permaculture terms, and the situation we are faced with today, what Tagore is saying is that all parasitic empires, including modern industrial civilisation, the nation state and finance institutions, will inevitably exhaust the resources which sustain them, and so decline and fall. Then the people who work will reclaim and revive the degraded land, and life will go on.

The message for the permaculture movement is that we need not think of saving or changing the world but of returning to normal, and rediscovering the convivial delights of being human.

1 http://permaculture.org.uk/people-projects-places
2 See ‘Permaculture and Politics’ (http://permacultureambassadors.blogspot.co.uk/2014/02/permaculture-and-politics.html )
3 ‘Anti-political’ can mean not ‘Party political’, whether Green or Leftist; also not reliant on influencing political leaders at national or international levels; also not understood in revolutionary terms, whether Marxist or Anarchist. Some of us, of course, take the view that everything in human life is political.
4 An indication of Tagore’s genius is given by the tribute to mark Tagore’s 80th birthday by Ramananda Chatterjee, ‘Rabindranath Tagore’ at www.tagoreanworld.co.uk .
5 Vandana Shiva, ‘How economic growth has become anti-life’, The Guardian, 1 November 2013, (http://www.theguardian.com/commentisfree/2013/nov/01/how-economic-growth-has-become-anti-life [20/2/14])
Posted by Permaculture Association at 4:19 pm